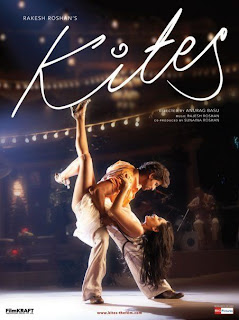 
Sizzling Heroin, Muscular Hero, Psychotic Vamp, Idiotic Villian, Scenic Setting, Frantic Chases, Brooding Romance, A Tragic End, Eternal Love - Ingredients of a Potential Blockbuster. But sometimes the sum of parts is not the whole. Because it depends on the cook, how much a particular spice should be added. This one has one too many slow motion set pieces, tight frames with a crazy background than can be digested. Its like attempting to make Tortilla and ending up with an Enchilada!
Kites, an ambitious project set in and around the border of Mexico and US, is a love story of 2 people who do not know each others languages. They meet out of need, get seperated and when they meet again, they dont want to seperate all over again. So, there's Hritik who forces himself to marry the Psychotic Kangana for her money and there's Barbara who for the same reason wants to marry the Idiotic Villian. Suddenly, out of no where Love appears in their hearts and they decide it's time to make a run for it. But Crazy Vamp and Idiotic Villian want revenge. So, starts a never ending sequence of chases intertwined with slow motion romance sequences.
The film has its plus points. First of all, its not too long, even though it feels long. Next, it has some amazing Cinematography, excellent production value and decent screenplay for the weak script. Also, it is a brave attempt of making an international film as its got a mix of spanish, english and hindi dialogues (characters dont speak hindi just for the heck of it!!) It would be a good idea though, to dub it in Hindi and release it in B and C centers. Also, the Director Basu, has some flair in terms of shooting sequences and his style leaves a mark.
But this is where the GOOD-buck stops!!! The problem with the movie is the weak script. The romance between the 2 main characters never achieves depth. They say "I love you" , but you never feel it. You see Hritik pining for her, but why you never understand. Anyways, maybe that's love - complicated ! Then there is the problem of some horrendous background score. When you have a movie so heavily dependent on background score, you need something operatic, magnificient. Though the attempt is brave, its weak. Most of all, the script is extremely weak.

Pages of the screenplay document seem to have been misplaced, thus resulting in converting half the scenes into SLOW MOTION pans! The first half is filled with THINGS UNSAID, LONG STARES, A SPANISH GUITAR playing in the background and you trying to plan what to eat next ! The second half is full of Chases and you laughing your guts out at some woefully shallow romantic sequences. Also, you wonder why Hritik, a U.S. citizen keeps fluctuating between an American and an Indian English accent? Our SuperStars really need to start getting into the skin of the character more and leave their own persona behind.
Overall, Hritik has done a good job in the film, while Barbara looks good, pouts and emotes decently. If you survive the film, you might take back a few good moments, but that is if you do not leave in the first half. I would say its a decent attempt at giving India a different kind of a love story. Anurag Basu, tried to create a Romantic Painting, but it ended up being a romantic PAIN thing ! Save your money for better fares coming up in the coming weeks, unless you are a Hritik fan. After all one of the films songs itselff preaches "Zindagi - Do pal ki" - why waste it !!! Pardon my Spanish - this one's POUR fa BORE !
Rating: 4.5 / 10

this was an out & out Hrithik movie... thats why i loved it :)
The girls hardly had any dialogues, could not wmote that well and the chemistry between Barbara and Hrithik just doesnt add up... another point to brood on is how come a brother and sister, brought up in the US in the same way, have such different accents???
but i dont think ur supposed to ask such questions in a bollywood entertainer... all this movie has is the glam quotient, hrithik's dance (1st 15 mins) and the scenic beauty...

Thanks to true critics like u, we audiences save a lot of money!!
Gr8 review! Eagerly awaiting Rajneeti..

Well, I think differently in this respect. Firstly, the non verbal communication between Hrithik and Barbara was speaking volumes. Hrithik did really brilliant acting. As for the content and script, the movie was able to carry the message (however high the kites go, you know they will come down)till the end. The cinematography was brilliant. the dialogues were crisp and subtle. The characterization of both hero and heroine was truly new and interesting. Infact, they did not deliberately run away but had to do so due to one single act done in heat of the moment. It was well written script. The sarcasm of loving someone just because of money was again different. YOu dont find any such hero in bollywood who would say, "mujhe sirrf jhooth bolna tha har bar aur usme mujhe kabhi koi problem nahi hui"

Only at one instance, the chase got too long,but most of the times they were able to keep interest with some really interesting conversation between the two.

Overall the story was gripping and both the actors have really acted well. As per me, the movie would rate 7/10.

Hi,
I'm new to your blog and although i dont agree with your verdict on the movie, i like the way you have reviewed it. unbiased and fair.. i guess i am gonna keep coming back to your blog...

the movie should have been named kati patang...well given the hype and expectations the movie had from everyone, it did fall flat on its head...besides like u said the script was weak... just having crossover romance as the central theme doesnt make it a good film... the script had to be strong...and frankly hrithik aur barbara ki jodi bahut thandi lagi mujhe... no chemistry...

Take a Shot at the Movies

If you like this blog and want to co-author with us, then kindly send us mail at aggarwal.prabal@gmail.com
or vicksitis@gmail.com

You Are Visitor Number